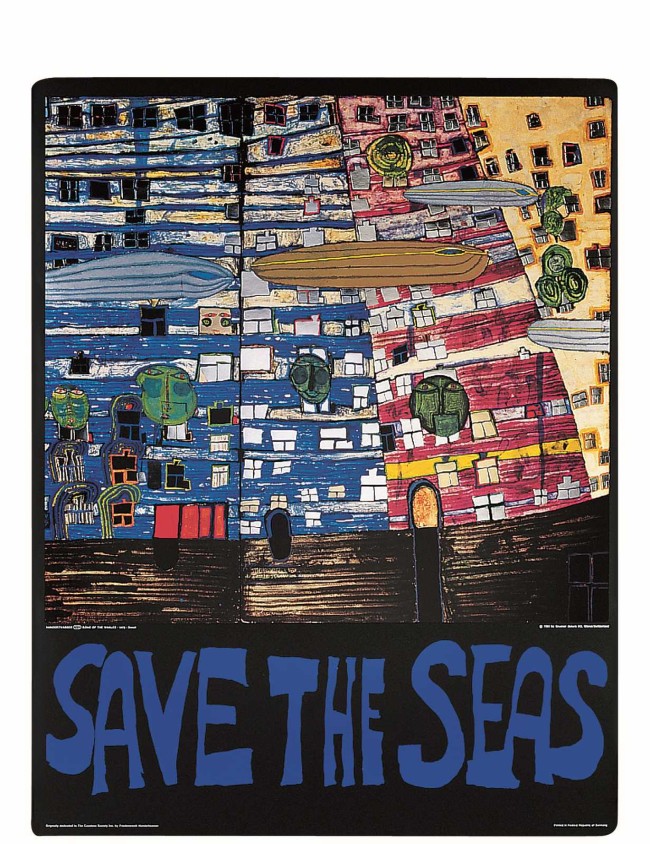 SAVE THE SEAS!
We do not keep our shit for ourselves
our shit is carried far away
polluting rivers, lakes and oceans
or it is sent to sophisticated
and costly purification plants
seldom to centralised compost factories
or our shit is destroyed
Hundertwasser, 1979/1980
***

The environmental campaign was initiated by Fred Banks, Harcourts Gallery, San Francisco, on the occasion of a Hundertwasser exhibition in 1981. The poster Save the Whales was donated by Hundertwasser to Greenpeace Pacific Southwest, the poster Save the Seas was donated and handed over to the Jacques Cousteau Society (Cousteau Society, Norfolk) on December 11, 1982, in the West Plaza at Ghirardelli Square in the presence of  Leonard Post, president of the board of directors of Greenpeace Pacific Southwest, and Jean-Michel Cousteau, executive vice president of the Cousteau Society.
On the occasion of the donation, the HUNDERTWASSER WEEK was proclaimed for San Francisco from December 5 to 11, 1982, by Dianne Feinstein, Mayor of San Francisco.